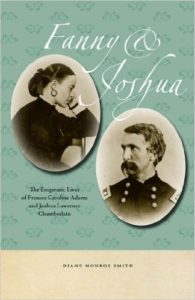 “Joshua Lawrence Chamberlain has become a Civil War icon, and deservedly so. But while we know a great deal about his military exploits and his later public career, we have known little of his personality and inner life. This biography of a marriage humanizes both Joshua and Fanny Chamberlain. It explores the trouble and triumphs of two real people who come to life in this intimate portrait drawn from hundreds of family letters.” (Dr. James McPherson, Pulitzer Prize winning author of Battle Cry of Freedom)

“Up until now Fanny Chamberlain has been a dimly seen, often negatively presented figure. Now Diane Monroe Smith has cleared away the mists and brought her to life with a wealth of hitherto unpublished letters and other information that also adds considerable illumination to Joshua’s life and character. A tremendous contribution to Chamberlain scholarship and literature.” (John Pullen, author of The Twentieth Maine and Joshua L. Chamberlain: A Hero’s Life and Legacy) 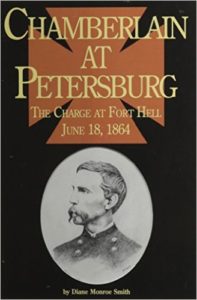 “This book needs to be in the library of every student of Joshua Chamberlain.”

“Smith prefaces Chamberlain’s writing with a detailed examination of Chamberlain’s and the 5th Corps’ experiences in the spring of 1864…and succeeds in setting forth the conflicts that developed among Union army commanders that had huge repercussions on the conduct of the late war.”

“By itself, Chamberlain’s manuscript is impressive. With author Smith’s annotations and illumination it becomes an important work.” (The Civil War Courier)

“…Chamberlain at Petersburg should be required reading.”

“Smith’s careful research provides the strategic and tactical context of the movements of the Army of the Potomac in the weeks leading up to the ‘Charge at Fort Hell’.”

“In her preface, Smith writes that Chamberlain’s words ‘makes us feel as if we are settling in an armchair opposite the aging warrior, and hearing him share his most vivid remembrances…’ Readers will no doubt agree.” (The Civil War News)

“In this hard-hitting and controversial book, historian Diane Monroe Smith has presented a solid assessment of command conflicts during the Overland Campaign. By focusing on the intriguing personalities of the main characters in the Army of the Potomac, Smith brings Grant’s command style into sharp focus. There are excellent and enlightening evaluations of James H. Wilson, John Rawlings, Philip H. Sheridan, Charles Dana, and other members of Grant’s inner circle; and at times the interplay of schemes and sub-plots seems almost to mirror a modern soap opera. There is a tendency to forget how very human historical icons were, and how much even towering figures like Grant could be mired in petty jealousies and controversies. The strongest part of this book is in the latter chapters, which focus much more closely on the themes outlined in the title. The author has given us a finely-drawn picture of the ways in which a group of ambitious men can not only change important events, but how those events are remembered – particularly when they work directly for a man who was not at all averse to tinkering with the historical record himself. Diane Monroe Smith is to be commended for offering us this valuable insight.
I recommend this book for anyone with an interest in the Overland Campaign, and also for anyone interested in how history gets written. (Frank Varney
Author of General Grant and the Rewriting of History 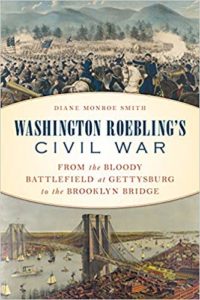 One cannot consider the life of Joshua Chamberlain without looking at his service in the 5th Corps, Army of the Potomac, during the American Civil War. [See Fanny & Joshua]

And when looking at the role he played in the 1st Brigade, 1st Division, 5th Corps, one has to give ample attention to the Battle of Petersburg, where a terrible wound came near cutting short Chamberlain’s extraordinary life. [See Chamberlain at Petersburg]

But while researching the 5th Corps in the Army of the Potomac during Lt. Gen. U.S. Grant’s 1864 Overland Campaign, it becomes apparent that attention must be given to Grant’s actual military record versus the “savior of the Union” persona history has come to adopt. It became a necessity to reevaluate his command style and unfortunate habits, ones that caused a costly & unnecessary extension of the war with the resulting loss of many more soldiers’ lives. [See Grant’s Overland Campaign]

If one examines the 5th Corps’ actual role in Grant’s Overland Campaign, which entailed great suffering, courage, and remarkable accomplishments, one can’t help but notice a young scout named Washington Roebling, who risked his life again and again to see that no soldier of the 5th Corps or the Army of the Potomac would go where he did not dare go himself. [See Washington Roebling’s Civil War] This latest work was released in July 2019 by Stackpole Publishing of Mechanicsburg, Pennsylvania, a leader in Civil War scholarship since 1930.

The Brooklyn Bridge is one of the best-known landmarks of New York City. Completed in 1883 after 14 years of work, the 1,600-feet-long suspension bridge crosses the East River and connects Manhattan to Brooklyn. It is still in use, making it one of the oldest roadway bridges still in use although heavy commercial trucks are no longer allowed on it. German immigrant John Roebling designed it before the Civil War and spent more than a decade promoting the idea before it was adopted. While planning the location of the bridge in 1869, he developed tetanus from a foot injury and died. His son, Washington Augustus Roebling, assumed the mantle of chief engineer and constructor. After suffering compression sickness, he managed the project in absentia and his wife Emily Warren Roebling managed the day-to-day affairs.

Emily was the sister of famed Civil War Major General Gouverneur K. Warren, who had gained everlasting fame for his role in the battle of Gettysburg. A statue of General Warren graces Little Round Top, where the New Yorker directed incoming Federal troops after spotting distant Confederate movement toward the unguarded height. Only a handful of Union signal officers were on the hill at the time, as well as General Warren and his staff, which included Emily’s future husband Washington Roebling.

Unlike Warren, there is no statue of Roebling on Little Round Top to inspire photographers and battlefield visitors. His role in the battle is largely unknown except to hardcore Gettysburg buffs.

Now, author Diane Monroe Smith has written a new book that details the youthful Roebling’s wartime experiences. Published by Stackpole Books, the biography is titled Washington Roebling’s Civil War From the Bloody Battlefield of Gettysburg to the Brooklyn Bridge.

“Washington,” John Roebling addressed his eldest son, “You have kicked your legs under my table long enough, now you clear out this minute.” With that early May 1861 admonition, 24-year-old Washington Roebling departed his father’s house and joined the Union army at the start of the Civil War. After a stint as a private in the New Jersey State Militia, he resigned and joined the 9th New York Infantry where he initially helped design and construct suspension bridges. Roebling was with the Army of the Potomac in some of its greatest battles, including Antietam, Fredericksburg, and Chancellorsville. At Gettysburg, he served as General Warren’s aide-de-camp.

As Warren and other staff officers scoured the countryside for troops to redirect to Little Round Top to counter the perceived Confederate threat, Roebling assisted Lt. Charles E. Hazlett’s Regular Army artillerymen in hauling several heavy cannons to the crest. Hazlett soon died from a Rebel bullet, as did a nearby Union general, Stephen Weed. Roebling by then had left Little Round Top to seek more infantry support.

In 1864, Roebling met Emily Warren who was visiting her brother’s Fifth Corps headquarters. Their relationship developed into a lifelong partnership and marriage that culminated in the successful construction of the Brooklyn Bridge.

Author Diane Smith skillfully tells the story of Roebling’s relationship with his father and with General Warren, as well as Washington’s wartime service in this compelling pageturner. Profusely illustrated, the book is a welcome addition to the historiography of the Army of the Potomac and its leading personalities. Washington Roebling’s fame as a post-war bridge builder is what we most remember about this remarkable man but his wartime experiences and relationships are what influenced and molded him. Smith neatly keeps Roebling’s personal story firmly grounded within the context of the larger battles and strategic initiatives of the Civil War.

It is a job well done by this Maine-based prolific author and Fifth Corps expert.